The final show of Danny Gokey”s  Hope Encounter Tour with Coby James is drawing to a close.  But don’t fret, the Celebrate Christmas tour will roll out shortly after!  It starts December 4th in Colorado Springs and ends near Seattle Washington on December 21st.

END_OF_DOCUMENT_TOKEN_TO_BE_REPLACED

Danny Gokey and Coby James  are out on the road each week through November 17th on the the second year of the Hope Encounter Tour!

END_OF_DOCUMENT_TOKEN_TO_BE_REPLACED

Danny Gokey and Coby James head out at the end of the month for the second year of the Hope Encounter Tour! The first show takes place on Thursday, September 26 in LaFayette LA and concludes Novermber 17th in Naperville, IL. We’ve heard Danny say that he will be rehearsing for four days prior to the tour kickoff. We’re guessing the song list will include his singles (HIFOM, TYHTBA, MTYTIA, Rise, The Comeback, Masterpiece, IYAII, and HSIY) and then some songs from his recently released album: Fighter, New Day, Wanted, Love God, Love People, and then??? Will he throw in a gospel cover or maybe a pop cover?

We are still to learn, wardrobe (hair) and dance moves for this year’s tour! We are excited to see this second headlining tour underway!

END_OF_DOCUMENT_TOKEN_TO_BE_REPLACED

Today it was announced that Danny Gokey will take Christian music newcomer, Coby James out on tour with him to the thirty-one cities booked for the 2019 Hope Encounter Tour.

Coby released his new song, “Paradise” today and is expected to have a new album released on Capital CMG by tour start.

END_OF_DOCUMENT_TOKEN_TO_BE_REPLACED

A new fall tour has been announced for Danny Gokey!  Its his 2nd headlining tour and it starts in Covington, LA before it hits 26 more cities and wraps up in Naperville, IL!  Last year Danny launched the first Hope Encounter Tour with guests Tauren Wells and Riley Clemmons.  We don’t know who will be appearing with Danny, yet, but we will update this post when we find out!

Check out our calendar for the dates HERE.

END_OF_DOCUMENT_TOKEN_TO_BE_REPLACED

On his Hope Encounter Tour with Tauren Wells and Riley Clemmons, Danny has debuted two new songs. We are pleased to share videos of “Just Haven’t Seen It Yet”.  This is one of Danny’s big vocal songs of encouragement.  Here are some of the lyrics in Danny’s new song:

Have you been praying, any you still have no answers?  Have you been pouring out your heart these many years? Have you been hoping that things have changed by now? Don’t forget the things He has done before.  Remember He can do it once more.  It’s like the brightest sunrise waiting on the other side of the darkest night.  Don’t ever lose hope, hold on and believe. Maybe you just haven’t seen it yet.

You are closer than you think you are, only moments from the break of dawn. All His promises are just up ahead. You just haven’t seen it yet.  He had the solution before you had the problem. He sees the best in you when you feel like your worst.  So when questioning don’t ever question his love for you.  Cause its something in his blood that you find to break through. END_OF_DOCUMENT_TOKEN_TO_BE_REPLACED

How fun is this?

When Danny Gokey takes on a hit song by Justin Timberlake, we think it deserves its own post!  Here is Danny encouraging us to dance, dance, dance! We were happily surprised to hear this pop song in Danny’s set, but it sure fits the theme of this tour.  You go, Danny!

This song debuted atop the US Billboard Hot 100, opening with 379,000 downloads in its first week, marking Timberlake’s fifth number one single in the country, and making it the twenty-sixth song on the Hot 100 history to start at the summit of the chart.[3] Additionally, it became the second song to spend its first ten weeks atop the Digital Songs chart.   It was written, sung and produced by Justin Timberlake for the soundtrack to the film Trolls(2016), 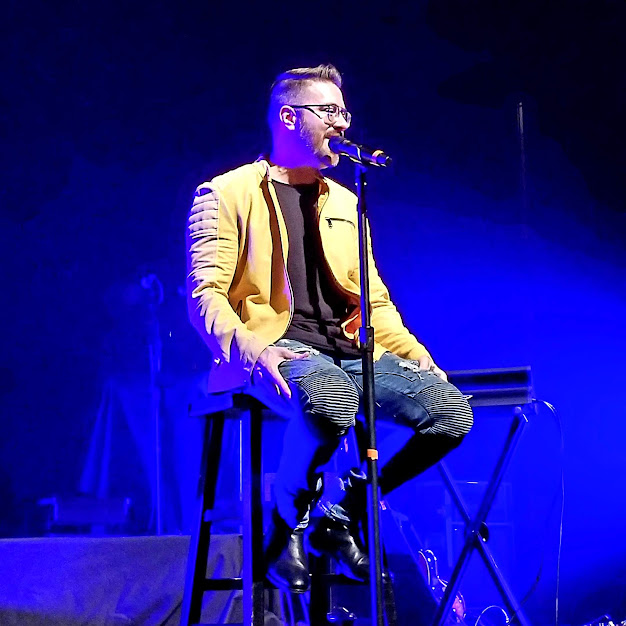 I’m intending this post for some of my photos, video snippets and things found from Danny Gokey’s headlining of the Hope Encounter Tour!

END_OF_DOCUMENT_TOKEN_TO_BE_REPLACED

What We’re Talking About!

We have some exciting news for you!! @DannyGokey w

Reposted from & thanks to @rizemedicalequipment #

Congratulations to @DannyGokey for his TWO @GMADov

Get Latest Posts by Email

This is a fansite made by fans for fans. All photos & media belong to their respective owners. No copyright infringement is intended.

For more information about our site, including our privacy policy and other administrative notices and disclosures, please see our About page.